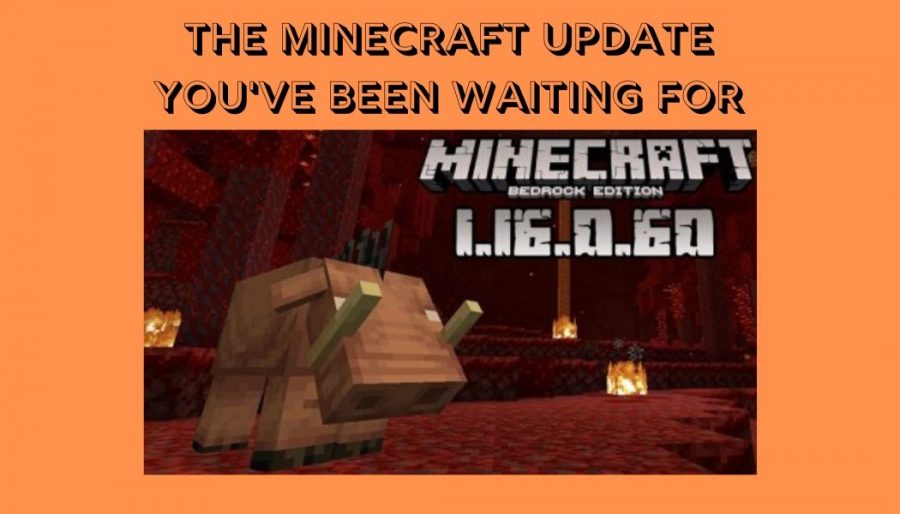 Well, we finally did it. We’re getting an update to the Nether, and it only took eight years! Still, we got a lot of new content this time around, including everything from new mobs, a new ore, and even additions to the game’s decade old soundtrack.

As mentioned above, we got an update to the Nether. Now, the old nether is just one of five biomes including: Warped Forests, Crimson Forests, and Soulsand Valleys, and Basalt Deltas. Warped Forests are pretty much just blue Birch forests in the Nether, but instead of zombies and skeletons, you get Enderman. This has already been used for speedruns. The Crimson Forest is pretty much a red Warped Forest, but with the new hostile mobs added: Piglins and Piglin beasts, and of course zombified piglins (retexture of the zombie pigman). I’ll go more into detail about them later on. The Soulsand Valley is pretty much heck. Just the normal Nether Wastes (the classic Nether), but every block in there is Soul Sand and Soul Soil (new variant of soul sand), with skeletons and ghasts shooting at you from every corner. You can also find Basalt (new block) pillars dotted around, along with some fossils. Basalt Deltas are Mesa spikes biomes, but made up entirely of two new blocks: Blackstone and Basalt. They spawn exclusively Magma Cubes, and have a snow-like wind in them.

There are two new mobs added in the update, as mentioned above: Piglins and Piglin Beasts, and their respective zombified counterparts. Piglins are the villagers of the nether, but instead of emeralds they take gold ingots. All of their drops, ranging for most common to least are: (most common) Gravel, Leather, Nether Bricks, Crying Obsidian, Soul Sand, Obsidian, (half as common) String, Ender Pearls, Magma Cream, Glowstone Dust, Nether Quartz, (quarter as common) Fire Resistance Potions (splash and regular), Iron Nuggets, (fifth as common) Iron boots with a random level of Soul Speed (new enchantment), (eighth as common) Enchanted Book with a random level of Soul Speed. Piglins will run from Zombified piglins, and hunt Piglin Beasts. Piglins drop just their inventory and equipment. Piglin Beasts are pigs on steroids. They have 4 times the health, and can deal up to thirteen hit points in a single hit. They drop porkchops and leather. They breed with Crimson Fungi, and run from Warped Fungi (both new blocks).

There were a few changes to just how redstone works to make quasi connectivity a little bit more straightforward. Unless you are the one percent that gets extremely technical with their wiring, you’re not really affected. We also got the brand new target block, which gives an input from one to fifteen depending on how accurately you hit the bullseye. The special thing about it is that because it counts as a redstone component, it is the only transparent block that you can run inputs through! You can craft with four redstone dust and a hay bale, in the shape of a cross. Also, because bonemealing the Warped & Crimson Nylium can spawn in those specific fungi, it means that fully automatic tree farms are now a reality.

Netherite is now the best resource. Not much else to say about that. You can find it anywhere in the Nether, but layer 14 is the most common place to find them, in veins up to 3. By them I mean Ancient Debris, the effective Netherite ore. It’s immune to explosions, so you can use TNT to mine it out, but you can only do it with a Diamond or Netherite pickaxe. After smelting the debris, you get one Netherite Scrap. 4 scraps and 4 Golden Ingots give you one Netherite Ingot. Now, you take your ingot and combine it with your diamond tools to upgrade them to Netherite in a smithing table. Pretty long for just an upgrade, but now you can one-tap skeletons

This update has a lot of new blocks. It has 75 of them, and to put that into perspective, the World of Color update, which had a main focus of bringing blocks into the game, only had 63. First one is blackstone and its 15 other variants. It’s just cobblestone, but instead of Stone and Smooth Stone, its Polished and Chiseled blackstone. You also have Nether gold ore, which is self explanatory. It also has a blackstone variant. Next is both types of Nether Stems and their 28 total other variants. They’re pretty much just red and blue wood, but not flammable. Next is Soul Fire, which is just soul soil or soul sand instead of coal. You can use it for Campfires, Torches, Lanterns, or just with Flint and Steel. The last one only works if used on soul soil or sand. Soul Soil is a full block variant of Soul Sand. Basalt, which is pretty much a lighter version of Blackstone. It can be made with flowing lava on a soul block next to blue ice. Pretty complicated. It comes in Polished and Unpolished forms, and both come in blocks, walls, stairs, and slabs. Next is chains, which are purely decorational. There are now Chiseled and Cracked Nether Bricks, which could be used to add something to the design of Nether Fortresses. You also have Crimson and Warped Fungi, Nylium, Roots, and Sprouts, each just foliage for that specific biome. There are also Quartz Bricks, which are again, decorational. There are Shroomlights, which are just glowstone inside Nether giant fungi. You have Warped Nether Wart Blocks, which are just blue Nether Wart blocks. There are Weeping (Crimson) and Twisting (Warped) Vines, which grow from up to down (Crimson) or down to up (Warped). You can climb them. You have the Lodestone, which can lock compasses to point to it. There is crying Obsidian, which is obsidian, but weaker and glowing. You have the Respawn Anchor, which is a Nether bed.

The music changed, which is something that has not happened since the beta days. You can find all of the music in the Nether, and the Nether only. It changes in each biome, which is something new. There’s also Pigstep, the only dubstep music in minecraft. It quickly became a favorite. There is a new mob called a strider, which you can ride over lava with a Warped Fungus on a Stick. You can also kill them for string.

That’s pretty much all the update has to offer! If I missed something just tell me, but other than that, have a great day!